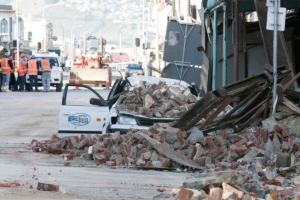 February is earthquake awareness month. Given the unpredictable nature of earthquakes it is important to understand how they happen, where they happen, and how you can best be prepared for a seismic event.

Earthquakes are caused by the movement of the earth’s tectonic plates.  The National Earthquake Information Center (NEIC) detects approximately 20,000 earthquakes each year; however, most are minor and do not cause damage.  Based on historical data, the United States Geological Survey (USGS) expects around 16 major earthquakes every year with 15 in the 7.0 magnitude range and 1 with a magnitude 8.0 or greater. As technology advances more earthquakes are detected but scientist have yet to develop a way to predict seismic activity.

Most earthquakes occur along the rim of the Pacific Ocean in an area known as the Ring of Fire.  The west cost of the United States is located around the Ring of Fire, and Alaska is the most earthquake prone state in the country.  According to the USGS, 45 U.S States and territories are at a moderate to very high risk of earthquakes.

There are great resources to learn more about earthquake risk in your area and how to prepare for a seismic event.  Los Angeles County is one that offers a guide for earthquake preparedness. Most earthquake related deaths are caused by fallen debris from damaged structures and other natural disasters that are triggered by seismic activity. “Drop, Cover and Hold On” or “Lock, Cover and Hold On” (for wheel chair and walker uses) are considered the best safety practices during an earthquake.

Individuals are advised to drop to the ground and crawl underneath a sturdy table or desk, then cover their head and neck and hold on to the shelter with one hand until shaking stops.  If there is no shelter available, it is recommended to crawl next to an interior wall and hold the head and neck with both arms.

The Earthquake Country Alliance also recommends large appliances be strapped in place and water heaters, televisions, large dressers, and bookcases be secured to the wall.  Families and work places should have an emergency plan that includes how they will keep in contact and reconnect in the event of separation as well as supplies such a require medicine, water, and canned food. After an earthquake, aftershocks will occur and other disasters or emergency situations may be triggered.

It is important to be aware of the natural disasters that threaten your community and have a plan of action in the event of an emergency. For the risk in your area and more information on how to prepare check out these resources: